A retrospective is a structured meeting that typically runs for 60 to 120 minutes on a biweekly cadence or after completing a large-scale project. It allows teams the opportunity to examine themselves and create a plan to improve how they work together moving forward.

A retrospective is meant to create a safe space for team members to share their honest feedback about what’s going well for the team and what could be improved. Retrospectives generate discussions around how to improve team collaboration, with actionable items that are documented and can be followed up on in the future (e.g., in the next retrospective).

!!! tip "Retrospectives help a team establish a practice of continuous improvement of their interactions and processes. This is achieved through reflecting on “how” a team delivers versus “what” the team delivers.”

Retrospectives create transparency and trust. They compel a team to discuss both problems and success stories. Being honest and transparent about the good, the bad, the ugly, and everything in between builds trust among team members.

Retrospectives enable the team to discover risks early. They allow the team to uncover blockers as early as possible. If team members feel comfortable, they will raise concerns sooner rather than later, giving the team more time to react.

Retrospectives empower team members. Team members define and own their actionable items and changes. Since team members are empowered to act on collective decisions, there will be little resistance to follow through on these changes. Thus, this gives power back to the team. 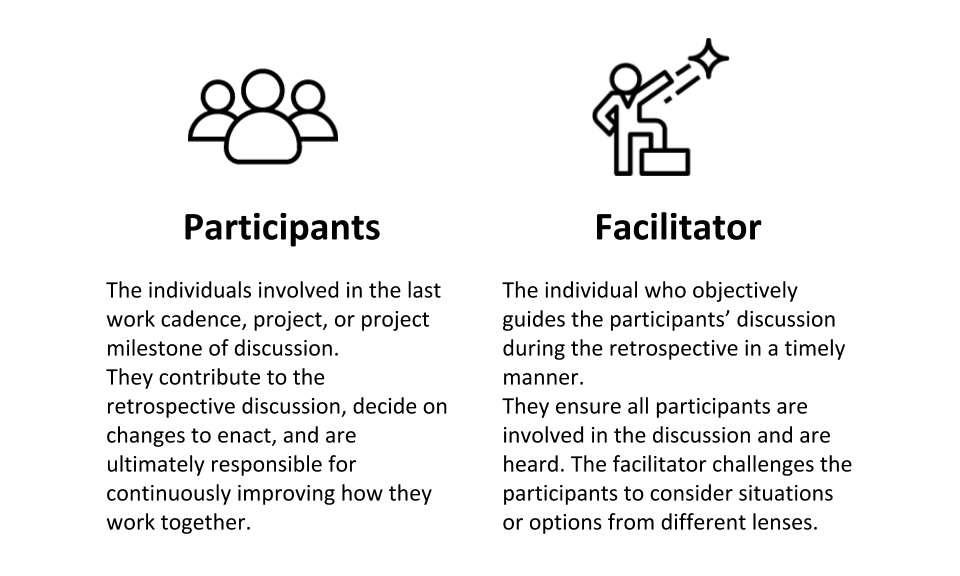 Role of the Facilitator#

The facilitator’s role in the retrospective is different from the other participants.

The facilitator does not voice their own ideas in the meeting. They encourage the group to speak up and keep the discussion on track. This requires enough cognitive load to make it difficult to perform this role well and attempt to contribute personal thoughts to the discussion. For a successful retrospective, it is helpful to have a designated facilitator that is not also trying to participate in the discussion.

The role of the facilitator is to:

The facilitator does NOT:

Role of the Participants#

The role of participants is to:

The Differences Between Retrospectives and Postmortems#

You may have already read PagerDuty’s Postmortems Ops Guide and may be wondering how a retrospective is different from a postmortem.

Postmortems are also structured meetings that provide teams with an opportunity to reflect, but they differ in several important ways. The biggest difference is meeting purpose: postmortems are for reflecting on the response to an incident, while retrospectives allow teams to reflect on their progress, pace, and delivery on a regular cadence. Key differences are summarized in the following table: